New Year begun with some new funding! This post will give a short overview of what some of our lab members will be doing in upcoming years.

Competition for this funding is always pretty strong. This year there were altogether 365 applications and 89 of them were eventually funded, so around 25% funding rate. You can see the list, unfortunately in Estonian only, of all funded projects here (link). 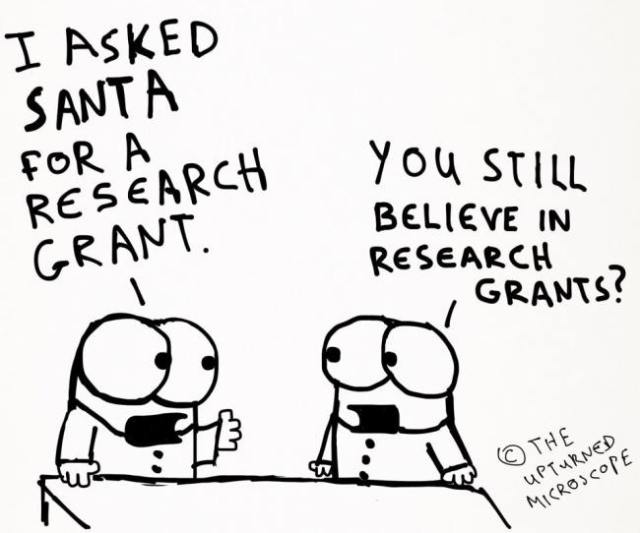 Ye should have faith! (pic from here)

Tiina’s project is titled: “Window through the past: the effect of mesophyll CO2 diffusion conductance on plant performance across 120 extant and 13 extinct gymnosperm species.”

Climate change leads to the alteration of multiple environmental factors simultaneously and, what is more, is expected to result in amplifying the frequency as well as the severity of both environmental and biotic stresses, and stress interactions worldwide. The responsiveness, tolerance and acclimation capacity to stress differs in and between plant species. Furthermore, multiple stresses can interact and alter plant functions resulting in greatly more complicated predictions of climate change effects on vegetation. As recently as about ten years ago, plant acclimation and plasticity were not taken into account in modelling vegetation trends and still mostly model angiosperms are used. Today, we have more advanced technology and therefore, better opportunities for detailed research. Fundamental knowledge about what photosynthesis is influenced by in various plant groups and how plants in all taxa react, acclimate and adapt is crucial to predict global vegetation responses to the changing climate.

A significant part of this response is the change in photosynthetic rate (An) and its underlying characteristics: biochemistry, stomatal and mesophyll conductance. Mesophyll conductance (gm) has now been estimated for more than 100 species, of which the vast majority are angiosperms. The photosynthetic limitation by gm varies strongly with mesophyll structure. The reduction of photosynthesis due to low gm is 10-30% in species with thin mesophytic leaves (agricultural plants, annuals, temperate deciduous tree species), but it is much larger (50-75%) in evergreen sclerophyllous leaves and in evolutionary old species (e.g. conifers and ferns). Only twenty gymnosperm species have been studied in terms of gm so far (most are studied by members of our group) and only three studies have considered the underlying structural correlates. Yet, there are almost 900 species of gymnosperms in existence and, consequently, this project will provide information of about 14% of them. Conifers show the lowest values of gm among spermatophytes. This constitutes a serious gap in our knowledge that precludes driving any broad conclusions as for the evolution of mechanisms controlling gm. In the next four years, this project aims to uncover the variation and consequences of mesophyll conductance in evolutionarily old plants by studying a large sample of Cycadaceae across a environmental water gradient, 80 conifer species and gymnosperm fossils to study the importance of gm as a limiting factor of photosynthesis across ancient gymnosperms at different geological time points. It is imperative to know how much photosynthesis is limited by gm in conifers compared to stomatal and biochemical limitations, if there is an evolutionary advancement for lower mesophyll limitations in evolutionarily younger species, and whether low WUE and PNUE are consequences of low gm. Furthermore, it is important to find out which structural traits are responsible for low gm in conifers for both modelling and modification purposes.

For more about mesophyll conductance in ecolutionary old species, see also this blogpost.

This project is a continuation of Lauri´s previous personal grant on similar topic, which was only given for two years, and therefore yielded just the most basic and initial results saying that indeed: both cold and waterlogging tolerance are negatively related to species capabilities of simultaneously tolerating low-light and low-water conditions. Plus, this pattern was different in angiosperms and gymnosperms, species region of origin and leaf type had no effect on this relationship. So now the idea is to take a deeper look into the causes and also effects of these complex and in some ways curiously contrasting patterns. Whether the intraspecific variability, or trade-offs between abiotic and biotic stress could explain these results in a more mechanistic way.

For more about polytolerance, see also this blogpost, and this one.